19 January 2017— Whilst most small companies were taking a break over Christmas, Brisbane-based Pennant IPS was busy training Virgin Galactic staff in using its highly regarded technical publishing software, following the news they had secured the sought-after software contract.

It was announced today that Virgin Galactic has selected OneStrand LLC – of which ADG is a joint venture partner – as their preferred supplier of S1000D technical publishing software, services and support.

ADG’s CEO Tammy Halter said the company was thrilled to be supporting the Human Spaceflight program and working with such highly motivated staff. “The thrill of winning this contract is all about the trust that this young and highly innovative technology company has put in us, allowing us to work with them on their goals to deliver a safe human space program,” said Tammy. “Working with a customer that is so motivated towards the end goal of trying new things, and making things simpler and better for the average person, allows us to do the same with them.”

Around 40% of ADG’s software users are based around civilian or military air programs and defence programs (land, air and sea) dominate about 65% of ADG’s business. Australian air programs utilising ADG’s software include Airbus’s ARH and MRH helicopters, Boeing Defence Australia for two projects and Virgin Australia who has utilised ADG software for operations documentation for the past ten years.

Most customers use a similar configuration to what Virgin Galactic will use. However Virgin Galactic is taking it one step further by implementing one of ADG’s newest pieces of technology, the R4i CDMS. The R4i CDMS is a content distribution and management server which is similar to having their own ‘app store’ for distributing electronic publications to devices and pushing updates to users.

“At a technology level, unlike many other vendors, we allowed the Virgin Galactic team to evaluate our software installed at their site. After a couple of days training, the team realised that our software was not only fast, but very flexible and extremely easy to use, with consistent functionality and usability across the product range.”

With further high profile customer wins about to be announced (in February), Tammy believes ADG’s and the OneStrand US team’s success ultimately comes down to their teams. “Obviously smart technology is a good base and opens doors. But it’s not just about the technology. It’s about every individual in our business going above and beyond to demonstrate who we are and how we help our customers, from first enquiry through to training and support after installation.”

Celebrating 20 years in business this year, ADG has changed significantly to what it once was.  “ADG started as an Australian-only based consulting and training organisation for another company’s specialist software application. After monitoring customer requirements and researching international trends, we decided to take our first step into software development in-house a few years later,” said Tammy.

“Today of course we build and deliver a complete software suite of tools compliant to S1000D and other associated specifications. Version 9 of our R4i CSDB software was released just recently which demonstrates the robustness and longevity of our tools,” she said. “We’ve also been focusing on various technology support systems to ensure we can educate and support our worldwide partners, whilst also training, consulting and supporting customers worldwide directly out of our Brisbane office.”

Being a female CEO in the male dominated areas of IT, defence, aerospace and transport, Tammy has also witnessed the massive shift in the acceptance of women in the industry over the past 20 years, from being treated as a ‘demo girl’, to witnessing more women starting successful ICT companies.

So what does the future hold for ADG? Tammy predicts the number of civilian and defence air projects will increase due to more civilian air component manufacturers requiring software solutions that are S1000D compliant.

“We’re also making access to S1000D solutions cheaper and easier with our new hosted platform, OneStrand AIR. So our big focus this year will be assisting those civilian air component manufacturers with their delivery requirements via OneStrand AIR,” said Tammy.

Not content to sit still, Tammy also plans to continue expanding in other verticals such as civilian shipping and rail manufacturing, where the S1000D specification is being increasingly used due to the benefits of data re-use; from design and engineering, through to training, maintenance, operations and parts management through-life. 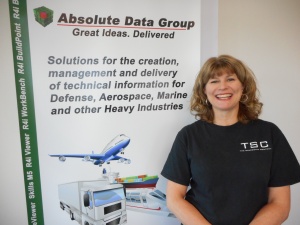 Absolute Data Group is headquartered in Brisbane, Australia and was founded in 1997 as an SGML consulting business. Today ADG is recognised worldwide for its innovative and user-friendly S1000D software suite. www.absolutedata.com